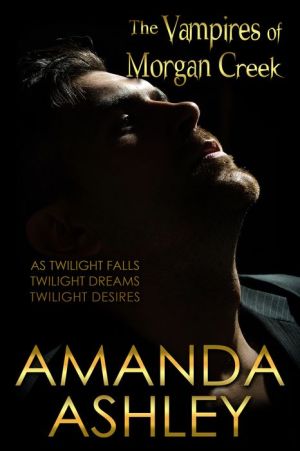 A master of her craft. Maggie Shayne   Gathered together for the first time, all three of New York Times bestselling author Amanda Ashleys seductive tales of Morgan Creek and its unforgettable inhabitants . . .   AS TWILIGHT FALLS Photographing ghost towns across the American West, Kadie Andrews takes a wrong turn and ends up in Morgan Creek, Wyominga spot that isnt on the map. Its a quaint little place, but when twilight falls, it takes on a sinister air. And when Kadie captures the attention of  master vampire Rylan Saintcrow, she can feel his power. He may be the most compelling creature shes ever imagined, but he is also a manone who needs a woman to be his willing prisonerfor eternity . . .   TWILIGHT DREAMS Holly Parrish has never met anyone like Micah Ravenwood: his dark eyes, his movie-star smile, the indefinable way he looks at her. Even when she thought he was simply another investment firm client, her lust overpowered her logic. But she never expected their attraction to lead her to an eerie ghost town in Wyoming. Only vampires call the deserted place homeand one of them is Micah . . .   TWILIGHT DESIRES Sofia Ravenwood was once fascinated by vampirestheir seductive power, their inhuman strength, their dark desires. Then one attacked her family, and she vowed to keep clear. Until she heard about Ethan Parrish: a sweet, sizzling-hot former college football player, turned into a vampire against his will. Wandering the deserted streets of Morgan Creek, Ethans sure he'll be alone foreveruntil Sofia agrees to meet him . . .